The last thing to be touched by a foreign hand is the hair.”

Arian, our ACT liaison mentioned this during one of our pre-departure orientation sessions.  While I don’t think this just applies to foreign countries, as many college students prefer to cut their hair back home over break, she certainly has a point.  I know of very few people who have had their hair done while abroad for a semester or less.  A definite exception is the DR spring break and dialogue crews, which included a bunch of people who had their hair done, but not cut.

Nevertheless, few people are willing to get their hair cut abroad.  For some reason, the travelers I know are more likely to get a tattoo or piercing abroad than a hair cut.  Does that seem strange to anyone else?  Of course, a few months after Arian said this, Kathy and I died each other’s hair in the Hotel Metropolitan bathrooms, and a few students had their hair cut.  But it was fewer than 15 of us out of 151, and I feel like an at home dye job is the same no matter where you are in the world, so I don’t really count.

Others have rules about dating abroad.  Some won’t enter into a serious relationship, knowing it will likely fail when they return home, while others won’t even casually date.  Some people won’t date other people on their trips, but locals are fine; most of the time I find that the reverse is the case.

While in third world countries, many have rules about internet usage, and television tends to be vetoed by most travelers regardless of where they are.  While people often fail at their internet bans as soon as they are given the chance, many others refuse.  While in Benin, a friend said it would feel like, “cheating on Africa” to go on the internet to email or use facebook.  Of course, a quick glance in the local internet cafe would argue otherwise, as well as the prevalence of our Beninois counterparts on facebook.

In perhaps the strangest example, several people on our Benin trip would not drink the tap water in Paris.  I’m pro-germ, and Cuba made me incredibly appreciative of clean tap water, so this just confounds me.  It’s a G8 country for crying out loud!  They have a permanent seat on the security council!  The idea that Parisian tap water is somehow drastically different from the water in Boston sort of boggles my mind.

Why do we abstain from certain things while away from home?  Does it make travel feel more “real”?  Are we afraid of the outcome?  Are there things you won’t do abroad that are normal for you at home? 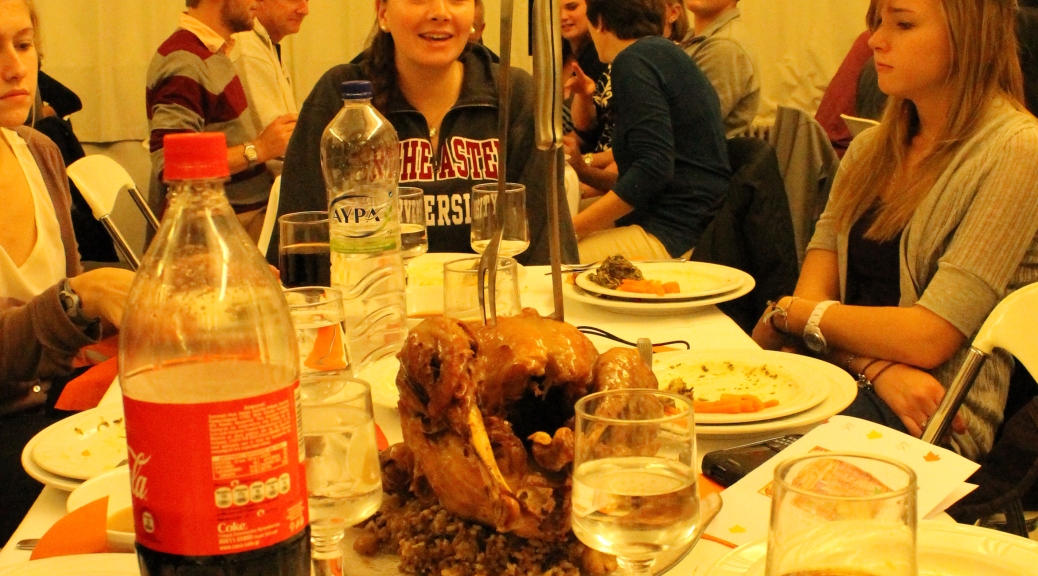 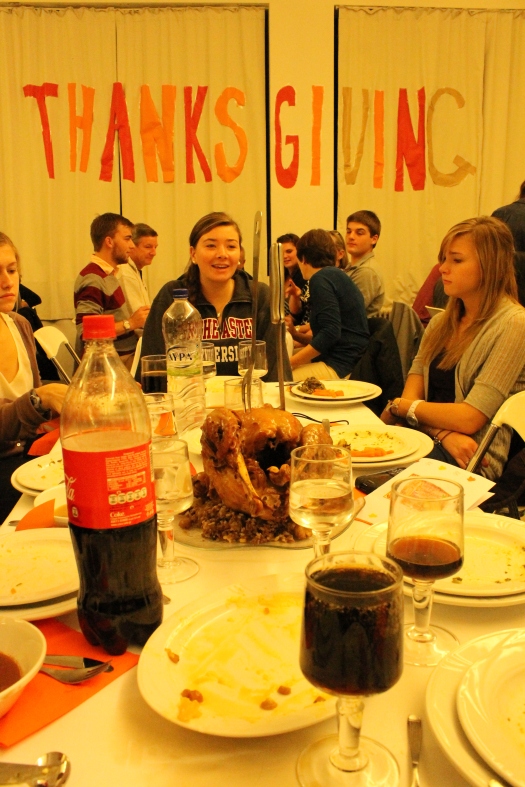 For the first time, our students realized that the people back home may be happier than they are.  It’s also possible that this was the first time they were right.  Many students’ families were able to come, but not all.  I think this made it that much harder on those who had no visitors.  Unlike a regular day, some students did have people to make them less homesick. 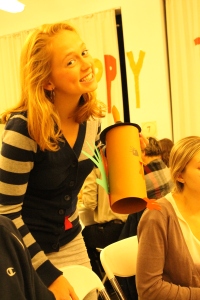 As for me, I couldn’t believe there was a Thanksgiving bigger than my dad’s side, which clocked in at 89 people this year (I would have been number 90!)  But alas, around 200 people filled the hall on ACT’s high school campus.  Of course, since it’s not a holiday in Greece, this came after a full day of work and school for Team Greece, which certainly added to the mood.  Also, I know it sounds silly, but not being able to relax and enjoy a glass of wine or a beer with my Thanksgiving dinner was a pain.  I understand why there are rules, but it was our job to spend all day and evening Wednesday and Thursday with our students, thereby disallowing us from a time to fully relax and enjoy the holiday.

Perhaps my favorite part was the contributions of our students.  Armaan and Vitaly played piano while we ate, Ben sang “Home” and made half the room cry.  There was going to be a prayer at dinner anyway (since when is Thanksgiving a Christian holiday?), so we went for the all-inclusive approach and opened the floor to our students.  A few said a Jewish prayer intended for the first time a person does something–like the first time a person has Thanksgiving in Greece.  We also had a few stripes of Christian prayer, and Sultan rounded things out with a spur of the moment Muslim contribution.  I only wish he had slowed down and translated it for the rest of us.

Another highlight of the was how classy and respectful our students were.  I’m totally impressed by the way they handled some disputes playing football, not having enough room on the bus, and a few non-NUin people giving them a hard time.  Any woman who can handle being called the C-word (for absolutely no reason, not that that even matters) by calmly removing herself from the situation is a mature person in my book.  We also had tons of our students calmly, respectfully, voluntarily leave the bus so other students could have their seats, even though many of those who offered up their seats had guaranteed spots on the bus and gave them to those who shouldn’t have been on it in the first place.ACT Staff, study abroad students, NUin kids and us.

To end on a good note, one of the very best parts of our Thanksgiving was that Danny Tierney, one of our students, organized an 8-team football tournament.  He had cones, a med kit and a well-lit field.  At least 63 people played, and easily that many people came just to watch, ranging from ACT and NUin staff to student families and Greek students.

While the food certainly left something to be desired (food should never be mistaken for both cranberry sauce AND gravy), the company and our hosts did everything they could to make a dreary day a lot more fun.  The bottom line for me, though, was that I really hate missing holidays back home, and a fun workday is still a workday.

Photography, culture and adventure travel from a social justice perspective.

Sharing these brilliant slides from @joeybirrd, which were in turn inspired by the work of Tema Okun @okuntema and Kenneth Jones. When I first read "The Characteristics of White Supremacy Culture" from the book Dismantling Racism last year during @nlcboston Institute, I was absolutely LEVELED by it. It put words to dynamics I had seen and felt in the #nonprofit world, while also pointing out things I had never noticed, due to my own privilege. This riff, in addition to having an excellent Tyra-style "hoe...but make it fashion" reference, has the same effect. Being able to put words to deeply held, previously unarticulated feelings is a powerful thing. I've really struggled with folks insisting we should all have so much free time right now, or that the remote versions of school and work are less time consuming, when they're clearly the opposite. Even if that weren't true, we're living through a once-in-a-century, apocalyptic level event. We're allowed to be stressed and need down time, instead of being #onthatgrind or whatever. It can be hard for those of us who identify with our contributions to the world, whether that's activism or art or a job that makes the world a better place, but even that can be harmful in the way it wears us down. We are more than what we create. How are y'all doing with this remote version of capitalism? What are your coping mechanisms? How are you deprogramming at the end of each day? What's helping you do more than just survive rn?
Pesto Pasta, by Dada and Mae, ft. Nana and Pop Pop. If you've ever met my brother, it should be no surprise that he and Mae Mae are writing songs together about one of her favorite meals. She calls the ukulele her feet are on her guitar and is very territorial if anyone else tries to play it - or if my dad touches Kevin's guitar. Our nightly dinner calls are the highlight of my day. I'm glad Mae has taken it all in stride. Seeing my brother play guitar with his daughter totally melts my brain, because so much of my memories of my dad growing up were nights like this, with the two of us crawling around his feet, or one sitting on his lap tucked in being the guitar, or our cousins staring at him like it was magic. Mae loves music and singing and her Dada and Hondo so much, but seeing her play with my brother was like being in a time machine. It's enough to make a person forget there's a plague on.
Some shots from St. John, #USVI from a couple of weeks ago. It feels like we were there a lifetime ago, but I got back two weeks ago exactly. A lot has changed since then. At first I didn't want to share travel photos since it felt a bit crass, but now that we're all cooped up for the Long haul, a little mental escapism feels pretty important. Also, if you're like me, you're mentally planning a ton of travel for once everything is safe again, so I might as well make a plug for the Islands, a place that has been pretty darn good to me the last six (?) years and is in need of the boost. St. John is part of the #usvirginislands and it's the greener, less inhabited island since so much of it is National Park. They're still rebuilding from the hurricane and it's slower going over there, but I'm guessing that's because their damage was more to resorts and beaches than to people and their homes and essential businesses. I hadn't been to St. John by land since a few years before the hurricanes. Some things have changed - more SUP tours and St. John's Brewery is a thing now - but a lot is the same. The biggest change on all the islands, from a tourist perspective, is that WiFi and cell signal are now broadly available across all carriers throughout the USVI, at domestic rates. Considering that access to the internet brings with it access to jobs, staying in touch with family, and essential services like retirement, health care, unemployment etc, I'd imagine that's a game changer for Islanders too. It just feels like such a crime that it took a lethal natural disaster to get basic infrastructure in place for so many Americans. We need to do better for the territories.